All Collections
Alarm and motion detection
The Security Alarm

Disclaimer: The Security Alarm and Motion Graphs are not currently supported on Minut Gen 3 devices installed Outside

The Minut Sensor can detect movement and notify you of unwanted movement in your property when the Security alarm is turned on.

You can choose to use the Security alarm in a few different ways, either separate or together:

How does it work?

2. Tap the Security alarm symbol and turn it ON. 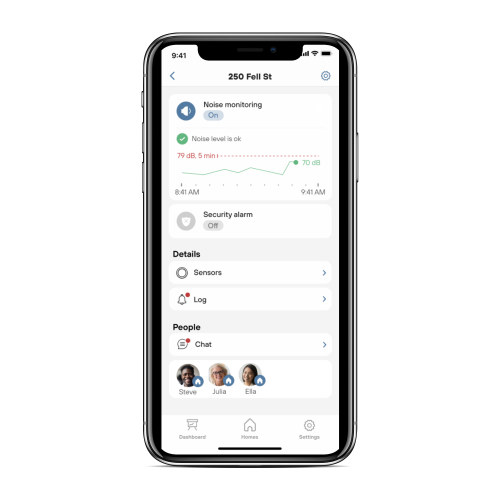 3. Your screen will change, but it can take up to 45 seconds before the Minut device detects movement after turning the Security alarm on.

4. If movement is detected when the alarm is turned on, the Grace Period will start and you'll have time to dismiss the alarm. The device beeps and the countdown shows how many seconds there are left until the siren starts.

You can customize the time for the Grace Period from your Profile settings. 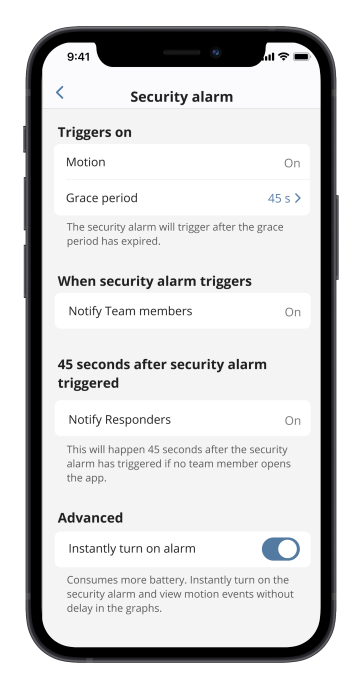 5. At the end of the countdown, the siren rings, and a notification is sent to all members in the home. 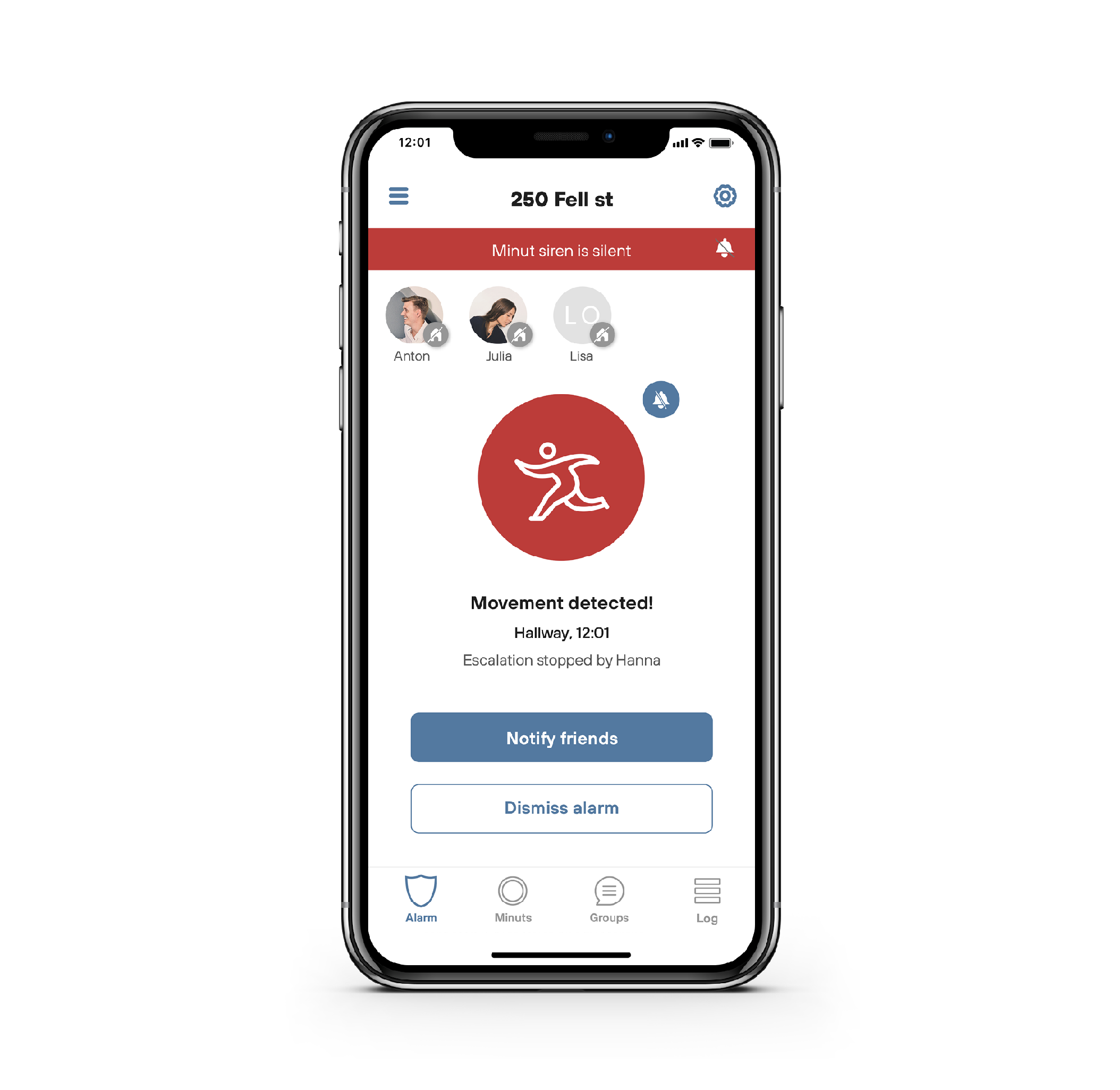 All members can see which device triggered the alarm and at what time. Anyone can turn it off by pressing Dismiss alarm. When the alarm is dismissed, the Minut device stops ringing and the alarm situation is considered to be under control.

If no action is taken, the siren will sound for 2 minutes.

Please note that there is an approximate 45-second delay between each time movement can be detected.

If you rather have the alarm turn on right away, you can toggle this with the feature called "Instantly turn on Alarm".

To toggle this, go to Settings -> Profile -> Security Alarm, either from the mobile app or the web app.

With this feature, you will receive a notification to remind you to turn the alarm ON and OFF when you're the last to leave or the first to arrive home. You can toggle this under your home settings in the app. 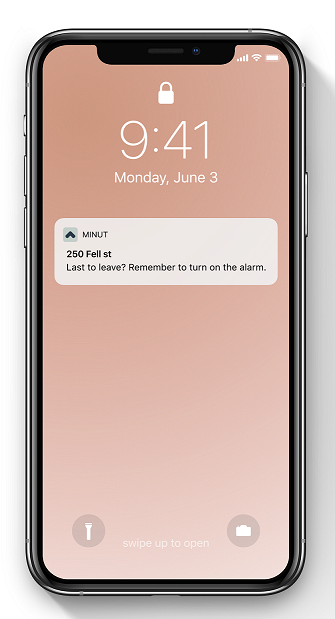 The image below shows the motion graph. Here, the horizontal axis shows the time of the day, and the vertical axis, the number of motion events. When Minut detects movement, a motion event is counted. The blue bars put together motion events that have been registered in the same 15 minutes period. 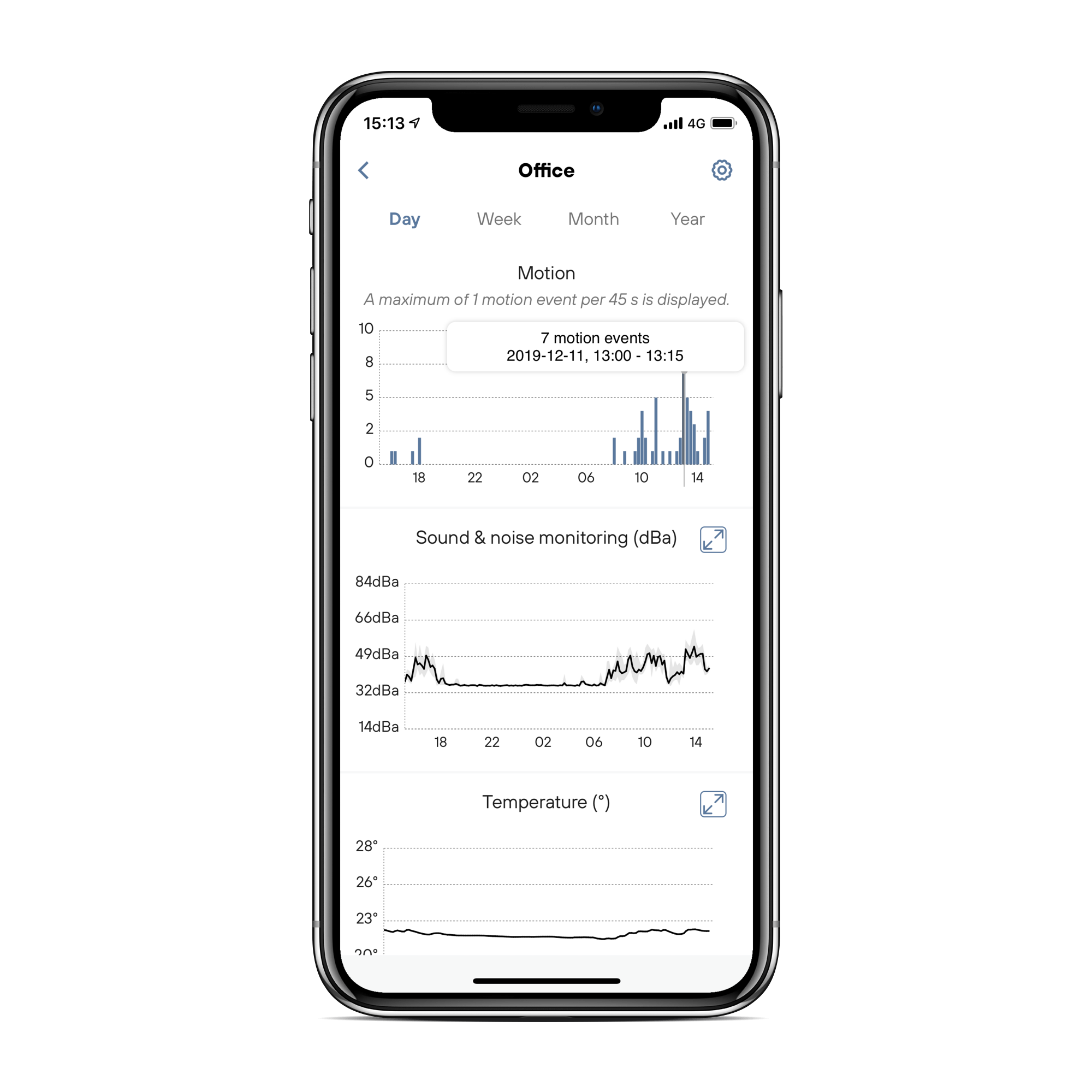 The motion graph monitors movement even when your Minut is disarmed, and it lets you be aware of what is going on at home without the need for cameras.

What to expect from the motion detection

What if my phone runs out of battery?

In case your phone is out of battery and the Security alarm is on and movement is detected, you can turn the sound off by pressing the main button. However, it'll still be sending notifications and alarming to the rest of your family and friends until they take action or turn the Security alarm off. A notification will also be sent that the alarm was muted by the button being pressed on the Minut device.

The Minut Alarm has 2 other features that can be enabled independently. These can help notify you of what is going on in your home.

Glass Break Alarm: By enabling the Glass Break Alarm, the Minut device will be able to detect the sound of glass breaking in your home, and will notify you by push notification.

Alarm Recognition: By enabling Alarm Recognition, you will be notified of any alarms going on inside your home. The Minut device can detect other alarms such as home security systems and fire alarm sounds.

If the Minut device is having difficulties picking up your specific alarm, we always accept sound samples at hello@minut.com to help make the Minut Alarm Recognition Feature better.